On standby: how the developing embryo guards against viral infection

Stem cells intrinsically express genes normally associated with the innate immune system, but in the absence of external stimuli such as viral infections. In new work published in EMBO Reports, the lab of Christa Bücker has discovered that expression of a key gene of the innate immune response, Irf1, is controlled by the gene regulatory network that regulates the transition from naïve to formative pluripotency during embryonic development. Their findings suggest that antiviral defense is upregulated to transiently protect the embryo from viral infections during a critical timepoint in development. 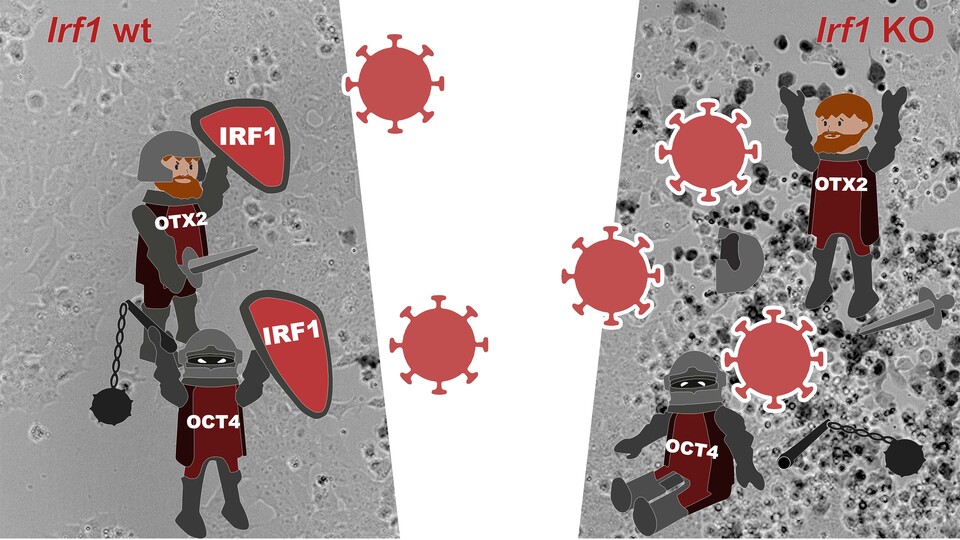 In embryonic stem cells, the pluripotency gene regulatory network (with the main players OCT4 and OTX2) controls expression of IRF1. IRF1 is a regulator of the response to viral infections (left). In the absence of IRF1, cells are more susceptible to infections (right). (c) Buecker lab and Luis Cerron 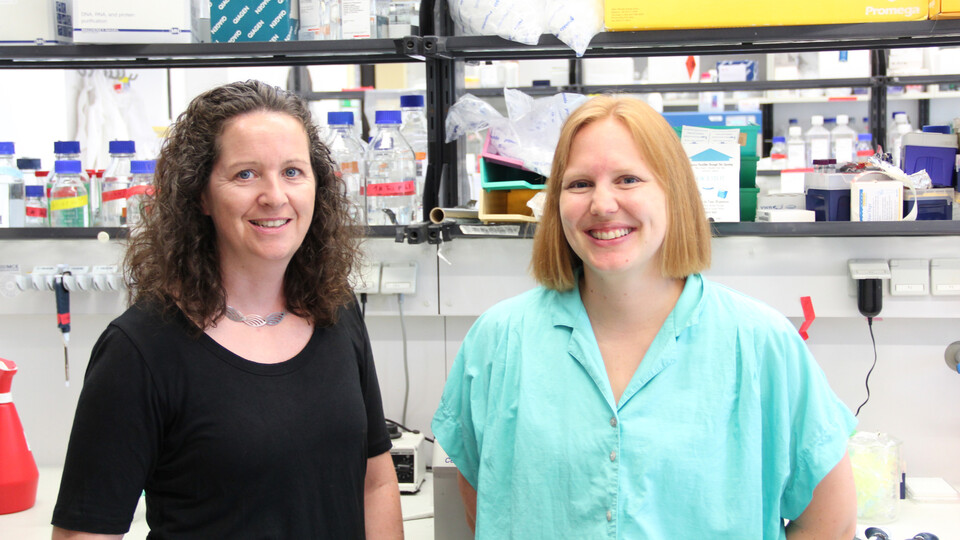 For many years, scientists have observed paradoxical behavior of stem cells. In their differentiated offspring, signaling molecules called interferons are activated upon viral infection and initiate a signaling cascade that results in the expression of antiviral genes, or interferon stimulated genes (ISGs). Stem cells, on the other hand, do not respond to interferon stimulation but are still remarkably resistant to viral infection. Accumulating evidence has indicated that the innate immune system, including ISGs, is constitutively turned on in stem cells. Precisely how the expression of ISGs is controlled in the absence of interferon signaling, however, has remained enigmatic.

Merrit Romeike, a PhD student in the Bücker lab, first set out to identify factors that are involved in the exit from naïve pluripotency, a key developmental step of stem cells. To this end she performed a CRISPR knockout screen to identify factors that influence the exit from pluripotency. One of the top hits from the screen was a gene called Irf1, an ISG which encodes a transcription factor. Utilizing a simplified in vitro differentiation system with mouse embryonic stem cells, the scientist discovered that while it does not directly control the cell state transition, it is nevertheless connected to the genetic network at the heart of the pluripotent cell state. “We could show that Irf1 is directly controlled by two pluripotency genes called Oct4 and Otx2 through a stem cell-specific enhancer”, explains Merrit Romeike.

Oct4 and Otx2 are both important transcription factors that safeguard the pluripotent cell state. Irf1 in turn controls a subset of ISGs in stem cells that confer antiviral protection. “The same genes that help cells to keep their identity also upregulate the genes which are required for the viral defense”, says Merrit Romeike. In vivo data further show that this intrinsic upregulation is transient and confined to a short timeframe. “Before implantation of the embryo into the uterus it is surrounded by the zona pellucida, an extra layer that protects the embryo for example from viral infection. But during implantation, the embryo hatches from that layer and attaches to the uterine wall. We found that exactly during this period of hatching and implanting, the intrinsic network upregulates Irf1“, says Merrit Romeike. “We suggest that, in vivo, the prophylactic priming of the antiviral defense system might protect the embryo at this vulnerable moment in development”. However, further research is necessary to confirm this observation in living organisms.